The meaning of natural cosmetics today 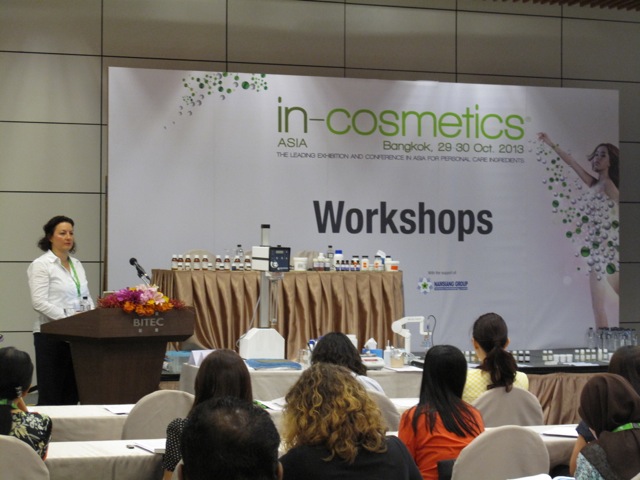 I had the pleasure last week of running the workshop at In Cosmetics Asia on natural and organic skincare.

The event was fully booked well before the beginning and there were plenty of green enthusiasts as well as people interested to know more about naturals and how to formulate natural cosmetics, even if they did not fully share or understand its ethos.

I started the workshop on the meaning of natural as it is not clear, and I was really curious to explore what the major meanings and perceived benefits of it were. Well after brain storming with the people attending the workshop  on the different meanings of natural the audience voted for safe cosmetics as the major value and biodegradable cosmetics as the second one. People within the industry might say that all cosmetic ingredients are safe within reasonable concentration, however the way I interpret those 2 votes is thinking in terms of long term effects on our health as well as on the environment health. In fact there is a past track record of synthetic chemicals that have been released into the environment without being fully aware of their long term consequences such as DDT, simply looking at their short term benefits. So the key question is how do we measure man made molecules long term effects on our health and the environment? 1,4 dioxane is officially classified as safe in trace amounts in several cosmetic ingredients (such as ethoxylated ingredients, PEGs) but has anybody worked out the amount accumulated in the environment every year? what happens when it ends up in the water drains? and its daily exposure effects on our health year after year?

To me natural cosmetics in the 21st century have gone beyond their botanical origin, becoming an icon for safety. It challenges the way the cosmetic industry  addresses and measures cosmetic ingredients safety for us and for the environment. Simple statements and theories are not enough to reassure people, actually it can backfire, making the “natural” position even stronger. Is the industry ready for the “natural” challenge? sustainable and biodegradable cosmetics? what do you think?

Formulating green cosmetic products since 1999, helping beauty brands around the world making the most of organic, natural and sustainable.